Plenty to be Thankful For

With all of the craziness in racing, from ADW controversies to breakdowns to auction slumps, it’s good to think about the good things on a day like today.  Also, a list is an easy way to blog on a holiday… now before I get angry e-mails from family & friends, this is just a list of thoroughbred-related things I am thankful for.  I won’t be listing “breakdown-free Breeders’ Cup” at the family dinner tonight!

1) CURLIN!  Though he did not start out as my favorite horse, he has raced and won his way into my heart.  Thanks to sportsman Jess Jackson (and a little help from the jailed part-owners) Curlin got to prove himself over and over again as an older horse.  He broke a legendary earnings record, raced on all surfaces and met all comers.  His retirement ceremony at Churchill on Saturday will mark the end of an extraordinary career.  Thanks for the ride, Curlin!

2) SAUHBR!  Thanks to The Borderland Totalisator (whose blog has mysteriously vanished, humm…) for an awesome summer of handicapping.  The first of many victories in the game, I hope.  I also hope BT gets back online, because he was a great competitor and gracious in defeat.  Thanks!

3) Larry Jones!  Trainer of the ill-fated Eight Belles handled the ultimate tragedy with grace and compassion.  When nutty PETA accused him of all sorts of horrific abuses, his level-headed replies revealed the activists for the slime they really were.  Amid the turmoil, he sent the filly Proud Spell out for an amazing season, as well as the sprinter Kodiak Kowboy.

4) Breakdown-Free Breeders’ Cup!  Despite all of the questions surrounding the Pro-Ride surface at Santa Anita this year, the track was successful in its ultimate mission: an injury-free Championship.  Every horse, every race, on poly or turf, came home sound.  This is the first time in several years that no horse was severely injured.  The track also levelled the playing field for the Euro contingent, which is always nice in a so-called “world championship” series.

5) JIM GAFFNEY!  Exercise rider for the Superhorse Secretariat and a close personal friend of this blogger, Mr. Gaffney has been a joy and privelege to know.  I have attended 2 KY Derbies with the man and his lovely wife, Mary, and have gained so much more knowledge of the racing business from him.  Thanks Jim!

6) TVG!  Not a day goes by that I don’t flip channels to TVG.  I love love love watching live racing with the hosts Todd Schrupp and Matt Carothers.  They are an irreverent bunch and their picks are pretty good, too.  I have learned a lot about handicapping watching TVG and am eternally thankful for the first all-racing channel.  Plus, I won an Eclipse Awards official program from them back in January.  Schwag always keeps my attention!

7) At The Races with Steve Byk on SIRIUS!  Every day I listen as Steve chats with the top names in racing, does a little handicapping, and has a good-old time talking to regular Joe horseplayers.  His show is a blessing for a sport that gets so little coverage by the MSM, and when it does, it’s usually dumbed-down *cough*ESPN*cough*  From ATTR, I have learned how top trainers condition their horses (pre-Derby shows) and have gotten a greater appreciation for the Pick 4 ticket and Super High 5 ticket.  Bob Baffert before the Breeders’ Cup was a big treat, too!  Thanks Steve!

8) MY LITTLE CONNOR!  This horse is the best little allowance horse in the world.  I hope he comes back to Oaklawn next year.

Next up, Santa better be reading my Christmas list! 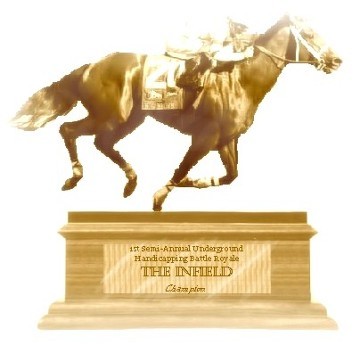 I’d like to thank Thunder Gulch for winning the 1995 Kentucky Derby and making my first pick a winning one.  I’d also like to thank Al Gore for inventing the internet that allows me to keep up with all the racing info I need to win awesome contests like SAUHBR.    Thanks again BT, for your rivalry and for the fantastic trophy.  Finally, a special shoutout to Mom, Dad, Sis and God — Thanks!

In a thrilling stretch drive, The Infield defeats Borderland Totalisator in SAUHBR Round 1!

The weekend marked Curlin’s victorious return to dirt in the Woodward, a shocking upset by Anak Nakal in the Pennsylvania Derby, and the contentious finale of the 1st Semi-Annual Handicapping Battle Royale (see, I *do* remember what SAUHBR stands for!!)

It was a good race, but in the end, the best seats were in The Infield!  I scored points in 4 races, hitting the big win with Curlin at Saratoga, and 2nds with Fareena, Gio Ponti and Silver Expression.  I also had some show points with Lickety Lemon (best name of the weekend), and Letthemusicbegin.

BT, it’s been a fun 6 weeks of ‘cappin’ the ponies and engaging in Dutrow-lite smack talk.  And now, you have one thing in common with Curlin: you got beat by a girl.

1)CURLIN
2)OUT OF CONTROL
3)DIVINE PARK

Tomorrow will be the beginning of the end for SAUHBR Round 1.  BT’s Pick Power selections represent the best of the final Summer Stakes from around the country.  It being a holiday weekend, BT has chosen a Monday race to keep the party going just a little bit longer.  After this weekend, most of my faves will be starting in their last BC Preps.  The next edition of SAUHBR should be the Breeders’ Cup itself – 2 days of top-caliber racing on a surface many have not ventured a hoof upon!  Drama, drama, drama!  The opportunities for upsets abound, and then there are the Euros!  But that’s for another blog.  I will post my OFFICIAL SELECTIONS later!

This final slate of SAUHBR stakes are:

FOREGO S. Gr1 — A lot of the excitement got sucked out of this race when Benny The Bull retired, but now Lucky Island and Tasteyville are the headliners.  I like Forefathers and First Defense to show up in there, too.
WOODWARD S. Gr1 — Curlin’s dirt return, his first race at Saratoga…Divine Park is making a race of it, and AP Arrow is in there again…if he runs his race, the Champ is gonna do it easily.  They’re even giving Curlin the Key to the city!

Woodbine: ONTARIO COLLEEN S. — Have no idea who’s running, but the name Lickety Lemon is priceless!

Philly Park: PENNSYLVANIA DERBY — Perhaps the best of the weekend, with Smooth Air, Ready Set, Two Step Salsa, and Atoned and a bunch of others!  14 entries, that’s truly a “derby”!

Also on Manday, a long-lost favorite of mine returns to the track after almost a year off — Mr. Franks!  This colt filled out a nice exacta for me at Oaklawn back in, um…2005?

Though I only had one 4pt winner this past weekend, I managed to hit the TRI in the Pac Classic!!  GO BETWEEN-Well Armed-Mast Track!!  I love that son of Point Given ❤  I also had hits in the Pat O’s (Rebellion/Barbeque Eddie).

Before this contest, my favorite play was the Exacta.  Over the past 5 weeks, I have become a regular Derrick Rose, raining TRIs like the former Tiger point guard.  3 TRIs in 3 weeks, and I’ve lost count of the EXs.

I don’t really have a regular “system” for picking horses.  I study the form and also call up an encyclopedic knowledge of racing trivia and replays, sort of like youtube in my head.  I’ve seen most of these horses’ sires and dams, either during their careers or in person at the farms I have visited (BTW< I am going back to Claiborne next month).  I get tips from Steve Byk’s At The Races radio show on Sirius (the Greatest Thing, seriously — if you ain’t listening you’re missing out on a TRI).  I watch a lot of TVG.  When I get ready to make out my picks, I look at the last 3 races a horse has run, how strongly he finished, who he beat, and then dig up any other assorted trivia I have to make the final choice.  It is highly subjective, basically (but not as bad as when I first started, way back in 1995 picking KY Derby winners by their names and silks colors), but it has worked for me.

It’s almost enough to make me forget that I’ve abandoned Roadtothebreederscup…I FORGOT to activate my scoring horses last weekend, and missed out on an assload of points…I had Ginger Punch, Hystericalady, Colonel John & Intangaroo…but that is just how committed I am to SAUHBR.

This weekend BT has Pick Power for the last time.  A part of me hopes he will finally hit a TRI, but the rest of me says, “nah…there’s gotta be an incentive to do this crazy game again!”

The Travers.  The 4th Classic.  The Midsummer Derby (actually the end of summer, but anyway).  Whatever you call it, it’s this week’s feature race for SAUHBR!

Before I get to the Travers Memories, here are my picks!

SUNDAY on the WEST COAST!!

skipaway2000
Create a free website or blog at WordPress.com.