On The Cusp Of A Crown 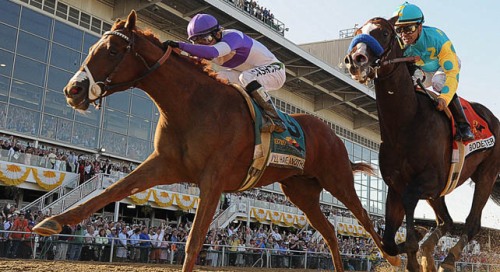 I’ll Have Another defeats Bodemeister in a thrilling Preakness! Photo by Eclipse Sportswire

We are on the cusp of a Triple Crown, ya’ll.

I never would have picked I’ll Have Another in February for this Herculean task, but as the races have progressed on this well-trod road, he has developed into a true, classic racehorse. One that has the tactical speed, athletic stamina and heart to prevail in the three toughest tests in all of horse racing.

The ease with which he has won the Derby and Preakness is astonishing and is a testament to the wisdom of his young jockey, Mario Gutierrez. When others would have moved prematurely, or hung too far back, “Super Mario” put his charge right where he would be at his best when the real running started. Again, going into the Triple Crown, Gutierrez was a liability, an unknown going up against the top jocks in the land. Never would have picked him in February.

The Belmont is called the Test of the Champion because it is a 1.5 mile marathon in an age of glorified sprints, at a track that laughs at the naive and rewards the clever and savvy, no matter how many fans are there to cheer for them.

Why do I think I’ll Have Another will prevail where so many other greats have failed?

Simply, he has proven to be the best of his generation. His only serious rival, Bodemeister, is skipping the Belmont after three grueling efforts. With Bode out, who in this class of 2012 is good enough to challenge?

In the Derby, none of the projected closers were able to gain on the leaders, despite a sizzling early pace, the 5th fastest in Derby history. Dullahan? Only proven on polytrack and is ineffective against even a moderate pace. Union Rags? Could be a threat, but he finds too much trouble and hasn’t yet passed a horse in deep stretch.

As lone speed in the Preakness, Bodemeister had the race his own way at every call, but he still couldn’t hold off I’ll Have Another. The next-best colt, Creative Cause, could do nothing but give chase, finishing 8 lengths behind the top two.

There is no Touch Gold, who in 1997, ran a deceptively good Preakness after a bad stumble at the start – he ran down Silver Charm in the final furlong at Belmont.

There is no Victory Gallop, who in 1998, denied Real Quiet the Triple Crown after running second to him in the Derby and Preakness, thanks to a well-timed ride by his masterful jockey.

There is no Lemon Drop Kid, who in 1999, defeated Charismatic after the Derby and Preakness winner was thoroughly softened up by the speedy Silverbulletday – he had lost the race long before he suffered his career-ending injury.

I’ll Have Another is no War Emblem, who in 2002, was an aggressive pacesetter who sulked when he didn’t have the early lead and was rendered impotent after a stumbling start.

I’ll Have Another is no Funny Cide, who in 2003, was outclassed in the Belmont by the regally-bred Empire Maker.

I’ll Have Another is no Smarty Jones, who in 2004, broke America’s heart when he ran second to Birdstone, a classy but underrated closer.

I’ll Have Another is no Big Brown, who in 2008 outran his generation in the Derby and Preakness, but didn’t have the stamina to run big at the Belmont.

There is no Curlin or Rachel Alexandra this year, no Lookin At Lucky and no Shackleford to throw wrenches in a Triple Crown bid.

All the rest of this promising three-year-old crop have shown their best, and they all have fallen short against I’ll Have Another. Is he the best of a weak crop? Only time and experience will reveal that, when these youngsters take on their elders in the summer stakes and the Breeders’ Cup.

Until then, I’ll Have Another stands alone, a mere lap around Belmont Park between him and immortality.