Plenty to Be Thankful For 2010 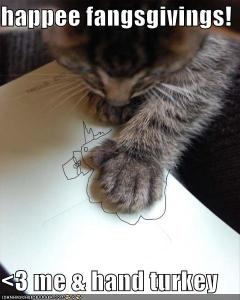 I can’t believe I am celebrating my second Thanksgiving in Tucson, far from the comfortable familiarity of the craziness that is my hometown and family, friends & MiniHorses.  It has been an exciting journey the past year and a half, with ups and downs that have made me question why I am still so dedicated to this sport – but in the end I look at the things I have learned, people I’ve met and experiences I’ve survived, and I am filled with wonder. As I sit at the Thanksgiving table this year, I will bow my head in gratitude for those who have stood with me this year, gave me advice and a helping hand when I most needed it, and provided a shoulder to cry on and a sense of humor to laugh with me in my foibles.

I will also give a nod of thanks to these things in racing that have made the sport sparkle in 2010:

Zenyatta – Of course I must start this out with the mare who’s saga has been the top story all year.  Despite her unsuccessful run at a 2nd BC Classic, Z had a fabulous year where she paraded, danced, bowed, posed and thrilled every racing fan who had the pleasure of watching her run.  I was fortunate to see her race live 2 times this year, in Arkansas and at Del Mar, where I spent a week following her every move.  Say what you will about her connections, campaign or overzealous online fankids – Zenyatta is a unique personality among horses whose love for humans is rarely seen and appreciated, even among the most jaded horseplayers.

Secretariat on the Big Screen — The movie was a candy-coated marshmallow of the original rich dark chocolate story, but audiences seemed to embrace the homage to Penny Tweedy’s Triple Crown winner.  The movie got mostly positive reviews from RTIP students and a surprisingly rousing recommendation from Roger Ebert.  The film has held steady in the top 20 since its release on October 8, even out-grossing more heralded films like The Social Network and Hereafter the longer it stays in theaters.  Big Red is my favorite TC winner, and Jim Gaffney was a great friend.  I know he is smiling about the movie, because he believed in it like he believed in Secretariat from the very beginning.

Lord of Misrule, new Lord of Fiction — I used to get picked on because I read a lot of horse books in school and would write elaborate stories about their lives and careers.  It is nice to see that one day all that might pay off.  The National Book Awards honor the best American literature, and this year’s winner for fiction is a tale of the characters, both human and equine, who populate the backstretch of a small-time track in West Virginia.  It has only recently been released, but the early reviews are strong, even from the racing community, which we all know is the toughest critic.  That mainstream writers of contemporary fiction have embraced the unique culture of the backside bodes well for future works about our sport.  Also, many schools use the NBAs for their reading lists – who knows, a future SkipAway2000 could be inspired by Lord of Misrule in an English class.

NTRA Live — Sure, its first live streaming broadcast crashed, but that was because they had underestimated the number of fans who would tune in.  Got that? UNDERestimated.  Meaning, they thought there would be fewer watching than actually did.  This is a fantastic problem to have.  Once the server issues were fixed, the NTRA Live program was a well-produced piece of online racing coverage.  With fewer major stakes getting the network broadcast, NTRA live is a critical piece of fan relations and promotion.  Not everyone has TVG, and many young racing fans are just not old enough to open accounts with TwinSpires of other ADWs for the live streaming those sites offer.  It also strengthens the link between thoroughbred racing and the NTRA, the sport’s supposed promotions & marketing organization.  Too many people knock NTRA, but with this program, they are getting back to their roots as well as embracing new technology to help spread the magic of horse racing.

Out-of-the-box Thinking — In NJ and CA, legislation was passed that opens the door for exchange wagering to begin in limited form here in the US.  This would be the biggest advance in American horse race wagering since the invention of the pari-mutuel system.  Are there important questions that need to be answered, and issues settled before exchange wagering takes off here? You betcha.  But if done correctly, this will generate the new revenue racing desperately needs.  This could even stop the spread of racinos.  Tracks would be able to operate off the revenues from their own games instead of being subsidized by others.  NJ and CA are not the perfect places to try this new way of imagining racing, but it’s a start.