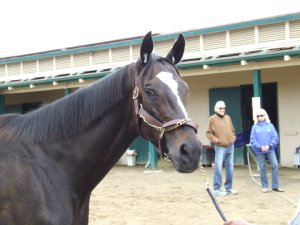 Zenyatta gives me the eye at Del Mar this morning. Jerry Moss & Dottie Sheriffs in background.

Today I started at Sheriffs’s barn around 8am. Zenyatta was tucked in her stall, gazing out at the other horses coming in and out of the stable area.  John told me to come back around 9, when she would be making her appearance on-track.

I meandered over to Baffert’s barn next door, where the place was bustling with activity with nary a media person in sight.  A big chestnut horse was having his post-workout bath and I recognized him as Misremembered.  I asked his groom if I was right, and he said yes.  I snapped about 8-10 pics of him enjoying the sudsy water.  The groom then pointed out that Bob had gotten a parking ticket!  The black Range Rover was parked in front of his office, a tiny pink slip stuck under the windshield wiper!  I took a pic of that, too.  The Man himself was over at the gilley stand watching horses work and didn’t know he’d been cited*.

I then headed down to see The Pamplemousse again.  I passed Julio Canani on the way and he said, “your horse just galloped!”  I said, “You know where I’ve been this morning!” And he gave a sort of exasperated “humph” as he continued on toward the Racing Office.  The Pamplemousse was walking around the ring in between barns, as cool and collected as ever.  He really is an athletic colt and deserves to return to the level of competition he left last year.  I hope he can do it.

I hurried back toward the Z Epicenter, just in time.  There was a crowd of TV cameras, news photogs and random backstretch visitors gathered to see her.  Also, everyone in the office decided to call me at that moment to get the scoop on her activities. I felt kinda dumb talking on the phone while everybody else was awe-ing.

When she appeared from her stall, she was magnificent.  All 17-hands of muscle and bone and dark bay coat towered over her groom.  Cameras snapped and videographers jockeyed (hah!) for the best spot to capture her.

She went around the walking ring a couple of times with her exercise rider, Steve, and then headed for the track.  I stayed close on her heels as she power-walked to the gap but soon fell behind, she is a *very* fast walker!

She posed for more photos before beginning her gallop, but she kept looking off towards the other horses working as if to say, “Hurry up people, I have a workout to get to!”

She moved effortlessly over the polytrack during the gallop.  The rest of the horses and riders had cleared the track, just for her.  Sheriffs watched through binoculars with a big grin on his face.  The gilley stands were full of onlookers.  The entire executive office was a ghost town as everyone rushed down to the apron to watch her pass by.

After one lap around, Zenyatta was hardly winded and had barely broken a sweat.  That was enough for the day, however, and she exited the track to the applause of the fans.

I met her back at her barn, along with the rest of the press corps.  There, she walked the ring several laps, stopping each time to pose for us.  Her legs were hosed and washed, and then she was allowed to graze on the sod panels carfully laid in the center of the walking ring.

She reappeared later this afternoon, in the paddock before the 4th race.  I had a great spot staked out at the opening to the paddock, dead center! By that time, the sun was full out and the colors of Del Mar dazzled.  The brightest star was the big, near-black mare, ZENYATTA

*Baffert returned to his barn just as Zenyatta was getting ready to go out to the track.  By that time as well, Jerry Moss had arrived in his town car, which was parked directly behind Baffert’s. Baffert spotted the pink ticket and quipped, “Where’s his ticket?” pointing to Moss’s car. Then he took the slip off of his window and pretended to put it on Moss’s car.  Moss chuckled.  It was all in good fun, but I think most of the eyes were on Z and probably missed that exchange.

Baffert seems to be a big fan of Z, as he hung out watching her just like all the rest of us fangirls and horse geeks.

I managed to sneak into one of the photos today, too. I really was there!